Talwar tells us a good deal about the flaws in our judicial system, and the undersized justice delivery system in India. He does tell us about the lack of adequate and competent judges at the higher as well as trial courts. He refers to the bias many judges suffer from, as also how those inordinate delays are resorted to by lawyers (and their clients) when they have a bad case.- www.thealternative.in

In the Nirbhaya case too the gap between theory and law has been highlighted. Following the terrible episode (and even before) there has been continual and great improvement in the substantive laws for both women as well as children who have been victims of sexual violence and yet despite their being so much publicity on the case, the author argues that, concretely, although there has been improvement in the laws themselves, we are nowhere near better enforcement or implementation. Even after the institution of a fast track trial and with the nation's attention focused on it, the Nirbhaya case still dragged on and it took more than nine months for the trial court to reach a verdict and, as the author explains there are still potentially further delays waiting at the level of the superior courts, the High Court certainly and the Supreme Court too, quite possibly. As the author goes on to show in this well argued book, a woman who is the victim of a sex related crime 'courts injustice' whenever she comes to a court, be she the victim of a rape, an acid attack of sexual harassment, the mother or father of such a victim or be it even any ordinary person struggling to find justice. 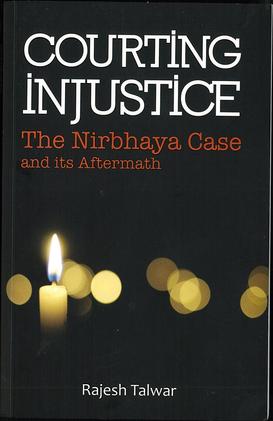 Courting Injustice by Rajesh Talwar is a book which entails the horrific gang rape case of Nirbhaya which took place in Delhi on the fateful night of 16 December. The book is divided into 10 chapters with each chapter dealing with a
certain topic.
Anger. Shame. Disgust. Helplessness. This is what I was feeling as I was reading the book.
It starts with the description of what happened on that night. The author also delves into the life of the victim and her family. From then on, he talks about the New-Anti Rape Laws which came into force as a result of this unfortunate event. This section of the book is comprehensive as it clearly delineated the difference between the old and the new laws. He not only talks about the crimes against women but also against men, children, and transgender.
The section on Verma Committee recommendations is thorough and well-articulated. From highlighting the good points to highlighting where it failed to offer the solutions, the author has done a very good job. He explains the lacunae in the system and how new laws filled those gaps.
The author not only goes rambling about the problem but also provides solutions. He first explains the problems which plague our judicial system backed with shocking statistics. Then he offers the possible solutions. The author also touches some crucial topics like marital rape, capital punishment and the inclusion of stalking and voyeurism as crimes.
The author has referenced many other cases which show that the book is backed with a good amount of research. The details are not too elaborate, just enough to summarize what happened without leaving any important details. The analytical approach towards the subject has helped the author to cover all the aspects in a balanced manner. The book has definitely helped me understand the subject a little better. - www.amazon.in

I appreciate author Rajesh Talwar for his genuine effort in letting the readers know more about the Nirbhaya case and what triggered other nations to telecast and write articles in this particular issue and why her gang rape stands out amidst other gang rape cases. Nirbhaya's brother said how difficult for him to watch one of the accused laughing in court. I was deeply disgusted by this behavior of the accused. In the book, the sections under which the male will be booked are clearly laid out in a simple manner so that we can have a partial view of the law but how many days will the accused be caught and justice will be given to the victims is a million dollar question. It was shocking , the 181 helpline for women in distress received 56 complaints of acid attacks then think about the rest of the cases.Stalking is also now a crime which is added in New crimes against women and girls along with Voyeurism. -www.goodreads.com

Buy from Amazon
View on Mobile