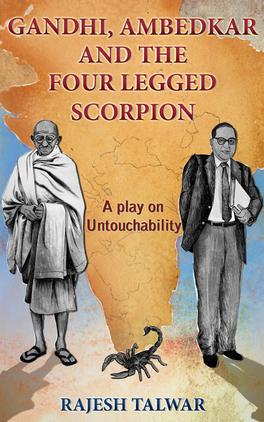 The Indian freedom struggle was a long one which spanned across, almost, a century and saw the rise and fall of various individuals and leaders. Leaders who lead not only from the front, but also on the front with people who supported their vision for the freedom.

First of all, Gandhi, Ambedkar And The Four Legged Scorpion is not a regular book wherein you read a genre specific narration, it is an actual play woven around the incidents that took place in the lives of Mahatma Gandhi and Dr. Babasaheb Ambedkar.

The entire play in the book is divided into three acts with multiple scenes and the fictional writing of the book is kind of thought provoking and relevant to the current time, the intensity of the conversations coupled with intelligent anecdotes that discusses the topic of untouchability.

I would recommend this historical fiction play to anyone interested in reading about the prevalent caste system in India and the two ideologies.- Errors and Kaushal

The book starts with a great introduction that will educate you enough on the topics it touches in three acts. The narration is strong and intense with fictional relevance to move the story ahead and retell a tale to the modern audience. This intense voice will help you read this play in a flow and with a pace and understand it better and appreciate the writing style. I think the writing style is professional and the strong narrative voice is the outcome of the author’s command on the storyline. Fictional characters evolve with the timeline of real incidents, however with only three acts there isn’t much for the characters to display.-Confessions of a readaholic

The play introduces both Gandhi and Ambedkar through significant events in their lives. In an opening scene Gandhi is shown to have been thrown off a train with his baggage. The very next day he is physically assaulted by another train official on another train. A lesser known train journey in Babasaheb Ambedkar’s life also proves to be life changing.
In the second Act the play moves on to show Gandhi and Ambedkar having matured and become great leaders, the one of the Indian nation and the other of the Dalit community. The Poona conflict between the two great men on the issue of separate electorates for the Dalits sought by Ambedkar and granted by the British thereafter ensues. Gandhi goes on a fast unto death unless the proposal is withdrawn for he believes that this will divide the country. Ambedkar, on the other hand, asserts that he will be hanged from a lamppost rather than betray the cause of his people….

I greatly enjoyed reading this play, but I would really love to see it performed on a stage. An introduction to an important part of Indian history, one that often is overlooked in the western world. The class system, and the idea of 'untouchables' is ones often glossed over in the history books of the Western world. Although many know of the result of the work these two powerful figures, few know the story of what led up to the men the world knows. I highly recommend this play, to read or to perform.- www.amazon.in