Sanju, a young college student visits Delhi’s red light area with a friend to celebrate his examination results. Soon after his visit he gets involved in a relationship with Ulfat who teaches at his college. Ulfat is trapped in a bad marriage with Hoover, a lawyer who has recently joined hands with his doctor friend Falooda to set up an NGO that will work on AIDS related issues. Unknown to Sanju, he has contracted AIDS and he passes it on to Ulfat. When Hoover learns of his wife’s infidelity he throws her out of the house. She moves into Sanju’s small studio flat. They seek advice from Elisabeth, a nun who distributes condoms in the red light area. As a result of her help they go to visit Dr Falooda’s clinic to try to obtain anti-retroviral drugs free of cost. Meanwhile, Hoover and Falooda are in search of patients on whom to test a so-called AIDS vaccine as the behest of an American doctor, Dr Carlos, who promises them introductions to funding agencies.
A work of imagination, the play nevertheless reflects realities of the AIDS situation in a country that today has the highest number of HIV positive persons.

High fidelity transmission - the title may seem like a science fiction meets romance genre,but in reality it does touch a very sensitive and taboo topic - sex and sexually transmitted diseases.It talks about real issues like how even a single incident is enough to transmit aids,the ways Aids/HIV patients are exploited,and what is the actual ground work scenario happening in this field.
The negative aspects of the book are the exaggeration of some plot points and little mismatch in parallel plot timelines.The book cover fails to generate adequate interest but the name is intriguing enough.
Overall a decent read.Highly recommended for those in search of a fresh and interesting write-up on a topic not so keenly discussed in India but definitely needed to be.- www.amazon.in 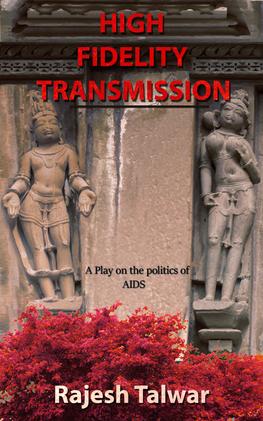 It took me some time to get into this, but not much. I have to say though that its very important that you read the preface before starting with the play. It provides you the context and the motivation for what happens in the play. No spoilers here. The title itself is an interesting play on words. Nothing to do with high fidelity transmission wires, but rather to do with fidelity in a marriage - and how the HIV virus can be transmitted even if someone is unfaithful just one a single occasion. The characters are wonderfully etched out. Sanju in particular is completely believable. I recommend that this play be staged in a theatre and adapted for street theatre and taken around the country to educate the masses. It will be so much more effective than the government pamphlets that are handed out....
I also loved the cover. Very evocative and it was what made me decide to read it!- www.amazon.in

This was a truly eye-opening play. I was lucky enough to get the benefit of a decent sex-education during my time in school. I suppose it's one of those things you take for granted when you've had the benefit of it and you are only vaguely aware of how things are elsewhere. This is an inside look at what it's like when you are fighting an uphill battle in an effort to save lives and prevent the transmission of various STIs, especially the HIV virus. The struggle, the stigma once contracted and the lack of resources. An eye-opening must-read.- www.goodreads.com