A great read. It took me some time into the book before I understood that this author was trying to accomplish two things at the same time, that is to say tell a story and also at the same time compare the two cultures. Some readers might find this distracting but I for one did not, and would consider it as a deal which provides Two for the Price of One. I did come across a couple of slightly negative reviews by people who wished to be only engrossed in a story.....It's true thought that it can possibly be enjoyed more by those who have traveled overseas, specifically to Inglistan or the United Kingdom as they will be better able to appreciate, if not agree with the authors views. Highly recommended for those who enjoy travelogues.- www.goodreads.com

English INGLISTAN is a novel. Its main protagonist Rabi is an Indian lawyer, who comes to New College, Oxford to do a six-month diploma in Human Rights Law. The novel chronicles the high and low points of his half-year through his interaction with relatives long settled in England, former Indian friends now based there, and students who represent British, American, European and other nationalities. He falls in love with an English girl and for some time it appears that the story will follow on the lines of the tragic affair his great uncle had with a European woman years earlier.

"If Westerners could journey to the East and write books on China, Japan and India, there was no reason why someone travelling the other way should not be able to do so as well," says passing protagonist Ashok, and indeed Talwar's book is all about cultural comparisons. -The Hindu Literary Review 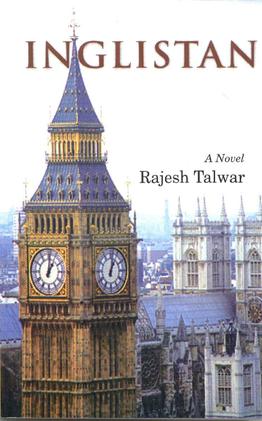 In the six months that Rabi spends in England, he meets a myriad of characters. Partly a cultural critique... (t)he writer describes the Jats as the Germans of Europe and the Bengalis as the French!-The Sunday Tribune