“Some initiatives are being taken by queer rights activists to dispel homophobia. For example, lawyer Rajesh Talwar's satirical play Inside Gayland revolves around the visit of a married Indian to a planet where homosexuality is the only natural form of intercourse while heterosexuality is outlawed. And an intense campaign led the Delhi High Court to decriminalise gay sex in 2009 - which was struck down by the apex court on Wednesday.” - The Telegraph, India. 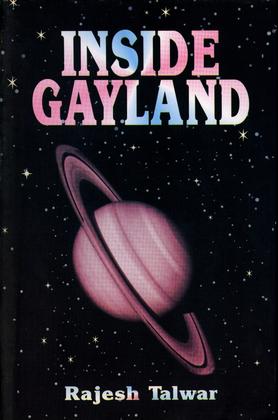 Inside Gayland is a crazy satirical play on the law criminalizing homosexuality in India. The absurdity of this outdated law comes out forcefully when seen together with a similar law criminalizing heterosexuality in Gayland. The mind-searing trauma of gays and lesbians in India shunned by society and criminalized by the law can be better appreciated in the light of the pathetic plight of heterosexuals in Gayland. This play is authored by Rajesh Talwar, who filed various petitions challenging discrimination against HIV positive persons (mandatory testing, segregation), including the first petition in the South Asian region that challenged Section 377 of the Indian Penal Code, the archaic British sodomy statute. A copy of the petition is attached as an Appendix to the book. A shorter version of the play was used as campaign material

Think of what would happen if you went on a spaceship and reached a planet where everyone was homosexual! Worse, if they were hell bent upon prosecuting anyone who wasn't. Talwar has turned the tables on heterosexual prejudice against homosexuals by forcing them to imagine such a scenario. Talwar's hero is an Indian lawyer who turns up in Gayland, an appropriately `pink' planet where everything goes the other way around. It's well handled and would make interesting theatre! Budding directors, perk up! Here's something that's funny as well as socially relevant. There are some brilliant characterizations especially those of Swasthi, Mela Malani and Alif Bachpan. Four stars for this effort, Mr Talwar (since the legal detail does get a bit tedious at times)!- www.amazon.com