THE KILLING OF AARUSHI AND THE MURDER OF JUSTICE

I absolutely LOVED this book! A true crime thriller that shouldn't be passed over, The Killing of Aarushi and the Murder of Justice is an in-depth look at all the twists and turns this case took, spanning the many years before "justice" was finally served. Talwar goes deeper, however, also looking at the facts in a new light, going through various scenarios that weren't presented at trial, and making the reader think, providing enough information for them to come to their own conclusion, as well as providing his own. A peek into one of the biggest murders of the decade, this book is a must-read that you won't want to miss.- www.amazon.in

The book gives a very minute and interesting examination on the verdict given by "the Court of Additional Sessions Judge/Special Judge, Anti-Corruption, C.B.I., Ghaziabad" led by CBI judge Shyam Lal. Divided in four parts, the author has tried his very best to probe all possible sides of the case.

The imaginary sarcastic conversation with regard to lawyers statement derived from his own marriage when he tries to prove that the old servant had physical relations with the teenage girl was hilarious. I cannot stop smiling with surprise every-time the concept comes to my mind...- Amita's Pen 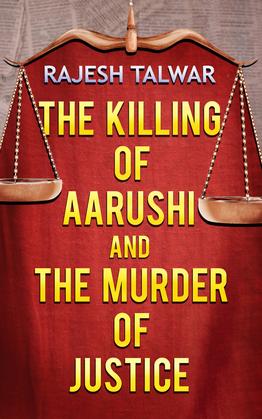 The author is clearly a very experienced legal professional with experience of the courts in India. There are parts of the book that are downright hilarious in terms of the foolish evidence given by so called experts be they crime investigators or those from the medical fraternity. There are many new things that emerge from a reading which I never knew about - for example that it could have been possible for a third person to have entered and committed the murders. In one of many interesting hypotheses in the book there is a suggestion that perhaps it was the servant who was the intended victim and it was Aarushi who became collateral damage. Once you finish this book I guarantee you will no longer be convinced of the guilt of the Talwar's if you ever were.
True crime is a relatively new genre in India. This is one of the best true crime books you will read this year. An arresting cover which I much prefer to the one in the other book on the Aarushi case. - www.goodreads.com

The Aarushi Talwar murder case involved the shocking and heinous murder of a young teenage girl, Aarushi and the family servant Hemraj, and was first investigated by the state police that allowed the crime scene to be heavily contaminated and robbed of all direct evidence. The case took many twists and turns, which were widely reported in the media. Initially the Talwars, Nupur and Rajesh, dentists and parents of the young girl were suspected of the crime by the state police, but subsequently when investigation was handed over to the Central Bureau of Investigation (CBI), the country’s premier investigative agency, the first team investigating the matter reached the conclusion that the Talwars were innocent and it was Hemraj’s associates that had committed the murders. The case took another turn when a fresh investigating team was put in charge following the appointment of a new director.
Many questions, however, still remain. This book considers some of those unanswered questions, examines the judgement and related material closely in the context of three possible scenarios, and concludes that the Talwars were probably innocent and should at any rate been given the benefit of reasonable doubt.