Talwar’s novel set in modern-day Afghanistan takes a volatile topic—a jihadist preparing to attack a guesthouse in Kabul—and explores the characters involved with empathy and insight.

The storyline, which takes place in the hours leading up to the attack, is narrated in large part from three points of view: Mohsin, the Afghan jihadist; Amala, an aid worker originally from Bangladesh staying at the guesthouse; and James, the British security consultant who loves her. As Mohsin contemplates what he is about to do, he retraces the steps in his life that got him to this bleak point. He’d been a promising architecture and urban planning student at Islamabad University, then a charity worker helping rural communities in Afghanistan. His life turned when he witnessed his entire family killed (while attending an outdoor wedding) by an American air attack, the orders for which were based on misinformation. Talwar’s compelling narrative examines people on both sides of this story—the terrorists and the victims—with an unbiased eye. Mohsin, in particular, is a dynamic character—an intelligent, compassionate, heroic man who somehow finds himself minutes away from participating in an act of terrorism that will undoubtedly kill innocent people. The novel—which is thematically reminiscent of Khaled Hosseini’s The Kite Runner—isn’t so much about war, but about the consequences of war as well as life in modern-day Afghanistan, the cultural oppression of women, political instability, religious bigotry and the blatant disregard of basic human rights. A line from the book is fitting: “When elephants fight, it’s the grass that gets trampled.”

When I read this writer’s other book – An Afghan Winter, I realized there was much to Afghanistan and the people that had been left out there. Of course, that story didn’t really have the scope for things like culture to be woven in. This book seemed to be the fitting reply to my wish.
The story revolves around three people and their lives – a social worker turned Jihadi – Mohsin Khan, British consultant – James Stewart and his love interest, Amala, the Bangladeshi aid worker. Mohsin’s family is wiped out in an air strike carried out by the Americans based on wrong information by a newly recruited civilian pilot with very less military experience. To avenge their death, Mohsin reluctantly joins hands with the Taliban. Through the Taliban, he learns about the pilot and his faith in his decision grows. However, he is unconvinced about the collateral damage the hit might cause. The attack eventually is executed, but does Mohsin get his revenge?
The writer has beautifully layered the story based on the characters. The narration is unconventional in a way that it is based on characters and not the timeline. Given the subject of the story, the writer had immense room to bring in emotions and capture the cultural state of an intriguing country. He has fully capitalized this and has painted a beautiful picture. The media paints a very grim picture of the Taliban – they are ruthless barbarians who would do literally anything without conscience in the name of Jihad. Who are these Taliban people really? They are humans who were at one point oppressed. Most often than not, these terrorists have a sense of misguided faith which is planted in them by miscreants who have interpreted the tenants of a beautiful religion to satiate their needs and ego. None of the media reports have so far captured this to perfect. This writer must certainly be lauded to even attempt that. Moshin, the protagonist, was initially shown as a strong and logical individual with humane values. The same character turns into a terrorist albeit an emotional one in the latter part of the story. This transformation from one end of the spectrum to other can’t really be justified, but the fact that such a transformation can happen due to circumstances has been elaborated in a captivating manner. It is apparent that the writer has spent enough time in Afghan as he has elaborated in detail about their culture from various perspectives – to be specific, in the perspective of an native and in the perspective of a foreigner.
The narration had all emotions perfectly in place except for one – Pain. I couldn’t connect with Moshin’s pain like I could with his dilemma and love. Barring that, the story, the narration and the characterization were perfect. The title is such a giveaway to the plot in a way, but is truly apt.- Shree Janani (www.amazon.in), India

An Afghan jihadi. A Bangladeshi aid worker. A British security consultant. How their lives are about to affect each other. * 'In a few seconds they will pull the door open and we will both be dead.' These are the panic-stricken thoughts of Amala, the Bangladeshi aid worker. Hidden inside a linen-closet with another woman she hears the voices of two Taliban fighters outside. The guesthouse in which she lives came under terrorist attack a short while earlier. One of the men sniggers to the other that there seem to be 'something bigger than rats inside'. As the seconds tick away, James Stewart, the British consultant, is racing against time to save the woman he loves. Standing outside the closet where the two women are hiding is Mohsin Khan, our sentimental terrorist. Mohsin, who worked for a charity and was peace-loving not long ago, is now fighting with the Taliban. What has turned him into a ruthless jihadi? This short novel will take you inside his mind and his world. 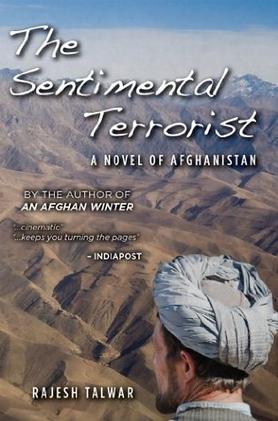 That story is not just about terrorism and war; it is also about love—or three love stories, to be more accurate. Mohsin Khan’s confession to the reader of his love for the translator, Mumtaz, is poignant and touching, as is Mumtaz’s heartache at having to sacrifice her own happiness in order to save her mother from her brutal stepfather. Amala and James also have strong and believable feelings for one another—and like Mumtaz, Amala must also forego love if she is to remain a dutiful daughter to her family. All four are star-crossed lovers, and while Kabul may not be Verona, Talwar’s tale is Shakespearean at its heart.

Although it is in many ways timeless, The Sentimental Terrorist is also a very contemporary tale. It is a story of war and corruption, of badly managed military and political campaigns, of indiscriminate bombings, and of the abuse of religion to lure young men into becoming suicidal killers. “We are a vengeful lot,” remarks Mohsin Khan, and in a country where “every family has a victim,” it is a sad but understandable fact that so many “will do anything to avenge” such a loss.

This is a powerful book, and one that will satisfy even the most seasoned observer of Afghanistan’s compelling role in world affairs.- www.forewordreviews.com