The hijras in India, Pakistan and Bangladesh represent a terribly marginalized minority community, to the extent that they are even ignored by human rights activists. In this book, the author argues that their situation can be compared with that of transsexuals in the west, both in terms of the psycho-social compulsions faced by a man who voluntarily decides to become a hijra or alternately a male to female transsexual as well as in terms of the complications regarding marriage, adoption and sexual status. In this book, the author has made a unique comparative study of the human rights abuses and legal problems faced by members of the third sex in the West and India.
This book is essential reading for human rights activists, social scientists, those connected with the law and the concerned citizen.

This book has very beautifully analysed about human rights violations specifically in India emphasising on the various causes of it. Its very useful for scholars working in the specific area of research.- www.amazon.in

This book changed my life. Its simply brilliant. I was born a man, but from childhood felt that I was a woman. I played dolls instead of machine guns, boats instead of aircraft. Till I read this book I thought there was something wrong with me. However it was an opener. After reading it I realised that there have been people like me who have existed for thousands of years in India. Nowadays, scientists accept this phenonmenon as 'normal' and term it gender disapora. The book will change your ideas about traditional male female role and also about sexuality. A must for the modern man or woman!- www.amazon.com

I beleive this is the best book I ever read. I live in New York city with my parents. My mother and my step dad. My step dad and my mother lived together for many years, but because my step dad was a woman they couldn't have me! Anyhow, what I want to share with you is that my mom went to a sperm bank, and got pregnant, and her partner went in for an operation and became a man. It's funny when you see how she looked as a woman, because now she has a big bushy beard.
This book explained to me that this is not something unnatural. This phenomenon - they call it transexuality - has existed in India for thousands of years. In the States, we are just beginning to accept that it can happen that a man can be born inside a woman's body and vice versa.- www.amazon.com 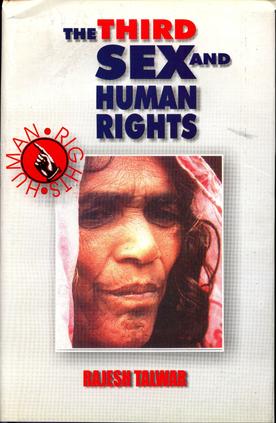 THE THIRD SEX AND HUMAN RIGHTS